Eucheuma, commonly known as gusô, is a seaweed algae that may be white, brown, red, or green in color. Eucheuma species are used in the production of carrageenan, an ingredient for cosmetics, food processing, and industrial manufacturing.  Eucheuma cottonii is the particular species known as gusô.  Other species include Betaphycus gelatinae, Eucheuma denticulatum, and several species of the genus Kappaphycus, including K. alvarezii. Since the mid-1970s, Kappaphycus and Eucheuma have been a major source for the expansion of the carrageenan industry.

Eucheuma are naturally found within the range of 20 degrees either side of the Equator in the Indo-Pacific region from eastern Africa to Guam, and are most concentrated in Southeast Asia.   Eucheuma are typically found below the low tide mark to the upper subtidal zone of a reef, growing on sand to rocky seafloor areas along a coral reef, where water movement is slow to moderate.

Their growth is similar to terrestrial plant species, where Eucheuma have a growing tip, or apical meristem, which is also capable of dividing to form new growing branches. They also show a triphasic life cycle, consisting of a gametophyte, carposporophyte and the sporophyte. Both the gametophyte and the more robust sporophyte stage are significant to the development of the seaweed, where their characteristics allow for increased vegetative regeneration.

Eucheuma Cottonii also known as sea-bird’s nest, underwater bird’s nest, coral grass, yogurt coral grass.  The white Eucheuma Cottonii is a rare raw, dried algae with a neutral taste and an interesting crunchy consistency.  It use in vegan cooking as a gelling, binding and thickening agent for dessert creams, ice cream, pies or sauces or in drinks (similar to Aloe Vera jelly consistency). 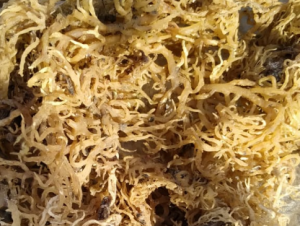