Konjac is grown in China, Korea, Taiwan, Japan and South East Asia for its large starchy corms, used to create as flour and jelly of the same name. It is also used as a vegan substitute for gelatines.

Konjac is traditionally used in Japanese cuisine and Chinese medicine. The konjac plant has a starchy root called corm, which is high in a dietary fiber called glucomannan. This is the part of the plant that is used as a dietary supplement and to make high-fiber flour and jellies.

The dried corn of the konjac plant contains around 40% glucomannan gum. This polysaccharide makes konjac jelly highly viscous and may be responsible for many of its putative health benefits as used in traditional Chinese medicine, detoxification, tumour-suppression, blood stasis alleviation and phlegm liquefaction. The dietary fiber from the corm of konjac is used as a component of weight loss supplements.

Konjac can also be made into a popular Asian fruit jelly snack, known variously in the United States as lychee cups (after a typical flavor and nata de coco cube suspended in the gel) or konjac candy, usually served in bite-sized plastic cups. 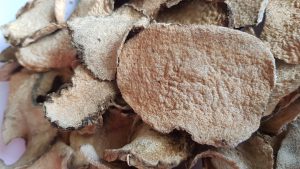 Konjac corm powder has a noticeable ‘fishy’ smell and is used as an ingredient in vegan alternative seafood products.  It can be incorporated into animal-product-free versions of scallops, fish, prawns (shrimp), crab, etc. For Chinese cooking, thin strands of konjac gel can be used as substitute for shark fins when preparing an imitation version of the shark fin soup.